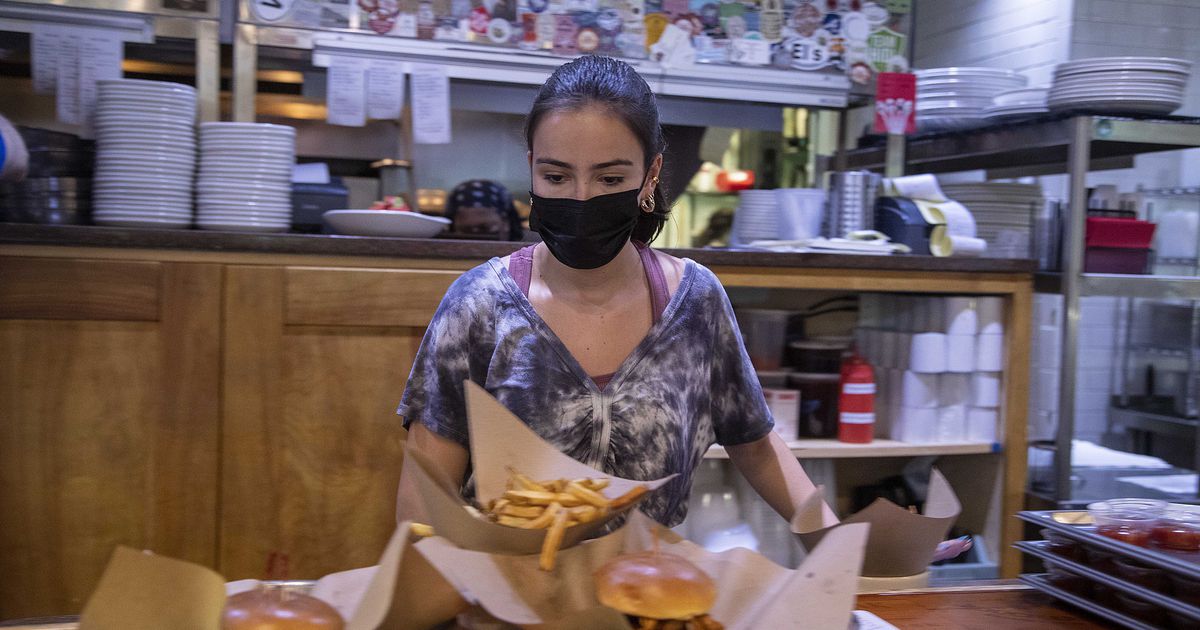 The worker shortage is causing some restaurants to face up to well-known industry dysfunctions: low and inconsistent pay, fast-paced physical work, variable and late hours that stretch through weekends and holidays, and a dearth of benefits such as paid vacation and health insurance.

The coronavirus delivered additional worker disincentives: fears of getting sick from customer or coworker contact, and abusive customers angered by low-staffed slow service or being asked to comply with wearing a mask.

Danielle Cuff, a former pastry chef, nuzzles a goat at Decimal Place Farm in Clayton County. COVID-19 shutdowns forced her out of the fast-paced restaurant industry. She works turning goat milk into cheese and has regained time, including weekends to spend helping her aging parents. (Alyssa Pointer/Atlanta Journal Constitution)

Derrick Atkinson walked away last November from nine years of running food operations and hosting events for Atlanta breweries. After the pandemic struck, he dealt with “300-pound dudes” screaming at 5-foot 2-inch waitresses who tried to enforce masking requirements.

“The animosity I saw last year during the shutdown and subsequent social distancing was beyond my comprehension,” said Atkinson, 34, who enrolled at Georgia State University and is studying criminal justice.

Workers started doing the math and decided “it was just not worth it,” he said.

Meanwhile, the virus is resurgent and prices for meats and other ingredients are climbing, adding new pressures, even as many Georgians refuse to get vaccines and wear masks.

To lure workers back, restaurants are boosting pay and benefits. Many now offer workers $15 an hour or more, plus signing bonuses. McDonald’s recently announced they will add emergency child care, 10% pay raises and a promise to get to $15 an hour by 2023 at company-owned restaurants.

Still, restaurants are begging for workers and the effects are being felt by diners, beyond longer-than-usual waits for meals.

“If you are paying more for people to work and for the costs of goods, then you have to charge more,” said Chris Hall, a partner in Atlanta’s Unsukay Restaurants, which owns Local Three in Atlanta and Muss & Turner’s and MTH Pizza in south Cobb County. “Prices are rising, without question.” 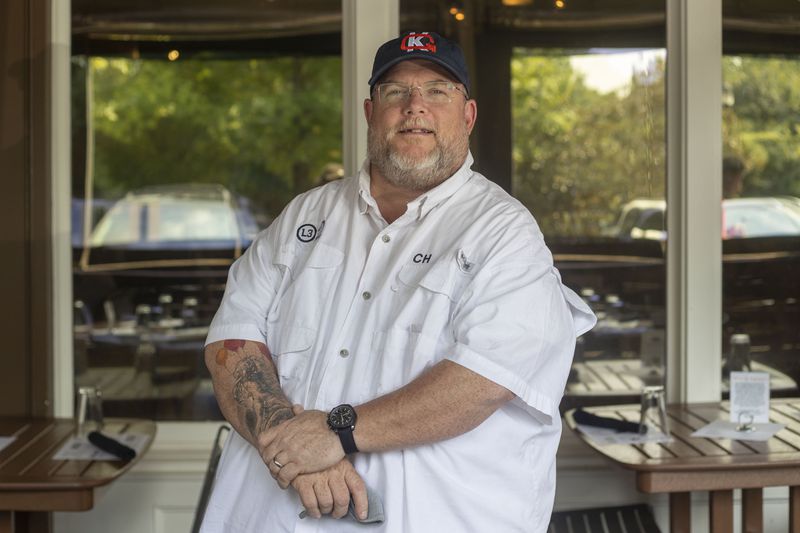 Chris Hall, partner at Muss & Turner’s restaurant in Smyrna, said the worst day of his career was when he had to lay off 147 workers when COVID-19 shut down the restaurant industry in Georgia. All that wanted to come back have been rehired, but the company still has a need for more workers. (Alyssa Pointer/Atlanta Journal Constitution)

Georgia’s restaurants employed 395,000 people in February 2020, or nearly one of every 10 jobs in the state. Another 100,000 worked in food services such as school cafeterias, according to the Bureau of Labor Statistics.

Two months later, as the governor was implementing shutdowns and social distancing protocols, restaurants were one of the hardest-hit industries. Over a few weeks, 40% of restaurant workers lost their jobs. About 4,000 restaurants closed permanently, the Georgia Restaurant Association estimates.

But the industry employs 39,000 fewer workers than before the virus and there are more than 50,000 open restaurant jobs across the state, the restaurant association estimates. Many owners are having to shorten hours or close for a day because of labor shortages.

Robby Kukler of Atlanta’s Fifth Group Restaurants, which has nine restaurants from the fast-fresh El Taco to the white linen tabletops of Ecco and South City Kitchen, had nearly 900 workers before the pandemic. Seventeen months after the shutdowns, Fifth Group is down to 450. Kukler said they could use 100 more.

Only two of their restaurants can open seven days a week, and signing bonuses of up to $1,000 have brought in few candidates. And Fifth Group should be a better choice as it already pays health insurance, gives paid time off and offers a 401(k).

Many owners expected more applicants after expanded federal unemployment payments ended in June, but most interviewed said it produced only a small bump. “We saw a little bit of an uptick, but nothing dramatic,” Kukler said. 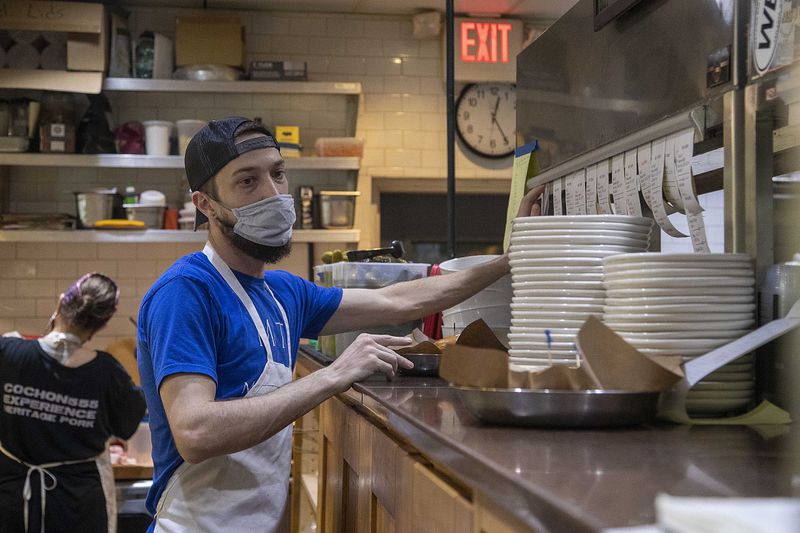 Sous chef Charlie Zaremba calls orders to the line cooks during the lunch rush at Muss & Turner’s restaurant in Smyrna. Restaurants are facing a hiring crunch in Georgia and around the nation. (Alyssa Pointer/Atlanta Journal Constitution)

Many haven’t thrown in the towel. David Anderson lost his job as chef when Blackbird, an Atlanta restaurant that just had opened when the pandemic hit, had to close. He has been finishing up a culinary degree while planning to open a new high-end restaurant on Auburn Avenue in the fall with a partner.

“This is a dream of mine,” said the former Marine, 32. “It’s not ideal circumstances … but it’s something I believe heavily in.”

Many others have moved on, though.

Taylor Young discovered an early passion for cooking and rode it through 10 years working in high-end restaurants in Atlanta and Chicago. As the industry collapsed, his pay was cut, though he continued preparing to-go meals. After a month, he quit and came home to Atlanta, where the pandemic pause changed his life.

He remembered working a Friday night years ago, when his mother found out she had lung cancer, and he had wanted to rush home to be with her. The head chef told him that he had to stay. He thought about 70-hour work weeks and working holidays and missing special family occasions that had become his life’s norm. No more, he decided.

“I was able to spend time with loved ones, able to reconsider what is important in life and how I wanted to live, and what legacy I wanted to leave for my family. And the restaurant industry wasn’t it,” said Young, 30.

He pitched in with his uncle, and the two started a home renovation and improvement business.

“I am very happy. I get to come home and see my fiancée and animals and cook for her. My mental and physical health has been way better since I left,” he said.

Though Young earned well beyond minimum wage, he knows most restaurant workers squeak by. The median annual salary in 2020 for someone preparing or serving food, not all of whom worked full-time, was $23,420, according to the Bureau of Labor Statistics. Thanks to the expanded unemployment benefits, some who lost jobs during the pandemic collected the equivalent of $34,760 a year, or $16.63 an hour based on a 40-hour work week.

“I would say 80% of people in the industry saw for the first time what a livable wage should look like when federal unemployment came through,” Young said.

Some restaurants also are trying to address worker concerns about COVID-19 exposure by requiring employees to get vaccines, and a few have moved to serving only customers who prove they are vaccinated.

Michael Dorf, who operates City Winery venues, where patrons are served a meal while musicians perform, requires proof of vaccination or a rapid test to get into the door at his Ponce City Market and other locations.

“We can’t afford to take it on the chin again after working so hard to open back up,” he said.

Still, Dorf said he has never had the hiring problems he has now. He is about 40% short of workers and has to take steps like spacing out tables to keep staff from getting overloaded.

Restaurants are facing other market pressures as well. The price of the food they buy is rising because of supply chain breakdowns and increasing delivery costs. Owners already have small profit margins.

There’s one place to go to cover increasing costs — customers.

Menu prices already are creeping up.

Hudson Riehle, the National Restaurant Association’s senior vice president of research, said menu prices in June were up 3.9% year to date. That is the highest growth rate since 2009. Some restaurants also are adjusting portion sizes to control costs.

Hall already helps full-time workers pay for insurance and guarantees $16.50 an hour. He said sit-down restaurants are making it on a 5% to 8% profit margin.

“What people have to understand is we are not making more. I am driving the same truck now as when I opened the place,” he said.

According to the National Restaurant Association:

According to Georgia’s Department of Labor and the U.S. Bureau of Labor Statistics:

According to a Joblist.com survey of workers in the second quarter of 2021: 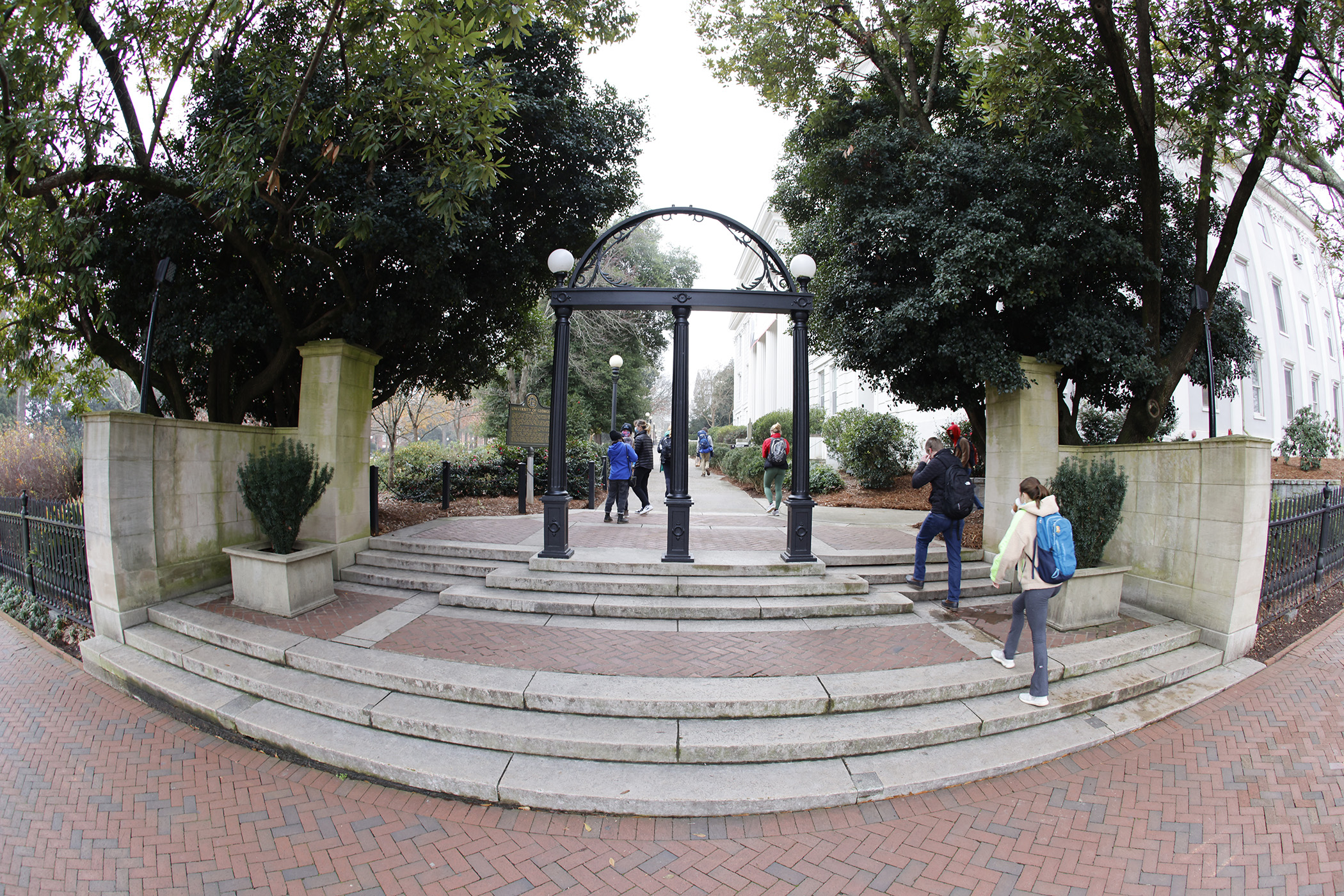